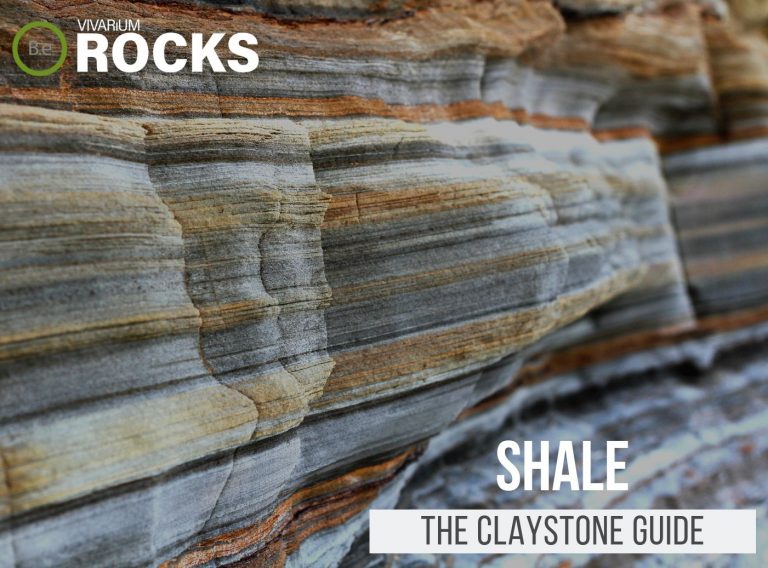 Shale isn’t usually the first stone to come to mind for most when it comes to traditional use in an aquarium. Contrary to belief, many hobbyists may find it in their vivarium in some form or another without even realizing it. Claystones are a very versatile and adaptable aquascaping material to put in ponds, terrariums, and even freshwater tanks if you know how to use them. This article will give more insight into shale rock and hopefully bring some potential interest to the very abundant vivarium rock that covers most of the planet.

What Is Shale Rock?

Shale is a fine-grained stone found in the clastic sedimentary rock category of hardscapes. It is mostly made with flaked clay minerals and will often have a mix of quartz fragments as well as calcite. This claystone is what you get when small bits of clay minerals slowly accumulate at the bottom of slow-moving water bodies… Often trapping large amounts of sand and silt along with it. If the newly formed Shale begins to become compressed along with higher temperatures, it morphs into the more commonly used version of itself, Slate. Much like Slate, Claystone is a layered rock that breaks into sheets, known as cleavage.

Shale is the most common stone found in the sedimentary rock family. It makes up about 70% of the earth’s outer crust. Shale Rocks are commonly referred to as Claystone because they are composed of mud and clay sediments that have accumulated over a long period of time. Mudstone, another fine-grained rock made from compacted mud, is very similar to Claystone. The only difference between Mudstone and Claystone is Mudstone breaks into fractures while Claystone breaks into cleavage.

When compared to Slate, Claystone is lighter in density and easier to break making it ideal to use in larger amounts within vivariums. When constructing larger hardscapes from fragments of rock, it would be preferred to use this rock over its metamorphic relative, Slate. Shale is also a very common ingredient used to make cement.

Shale is mostly known for its fissility, meaning it breaks into thin layers. Due to its fine-grained nature, it has a smooth textured surface with no porous or vesicular appearance. Shale does have serrated edges but can easily be worn down to prevent injury to inhabitants. On the Mohs scale of mineral hardness, Shale is a three, making it slightly harder than a Mudstone (2.5) and slightly softer than a Scoria (Lava Rock) (3.5). This should give reference to the fact that it is easier to carve and file down than most hardscaping rocks.

Claystone will vary in color as well depending on the type of minerals compacted during its conception. Colors will range from Black to Gray if it has high amounts of carbon (decayed plants) found in it… To Red, Brown, or Purple if ferric iron (iron in its oxidized state) is present. White, Green, or Yellow are variations of Shale that consist of high amounts of calcite (calcium carbonate). Even though all colors are generally safe for vivarium use, it is good practice to do an alkaline test on the rock if it’s going in an enclosure that needs to stay in a particular PH range.

The last property to note about Shale Rock is its weight. When compared to other types of vivarium rocks, Claystone is almost over the middle of the spectrum. It has a density of about 2.06 to 2.67 grams per centimeter squared. This is something to keep in mind if you are considering its use in tanks with inhabitants. A rock this heavy could prove difficult to move, ship, or house in a stable way.

Shale Rocks are usually found in areas where slow-moving water has allowed them to settle and form. Being so light in nature, the fine-grained particles that make up this rock, will stay suspended in water and float far from its origin. Heavier particles like sand or silt would deposit sooner along its journey leaving the habitat that claystone is found in, consisting of mostly mud. Claystone can be found at the bottom of lakes, floodplains, and lagoons… Along the banks of river deltas… Or offshore off of beach sands. This is going to be a stagnant water type of environment for those looking to mimic something similar.

Due to its sedimentary composed material, Shale is inert. Meaning it virtually has no impact on the environment it is placed within. This makes Claystone ideal for any type of vivarium with soft acid water. If for any reason you experience a shift in PH after placing this stone in an aquarium, it either has been exposed to influential minerals and needs to be cleaned… Or the oxidized metal minerals compacted in the stone are beginning to leech out. If you are not sure if rather or not the shale you have is authentic, pour a small amount of vinegar on the rock, and if it bubbles… Don’t use it in softwater enclosures just to be safe!

Shale does best in vivariums that contain softwater thriving inhabitants and are acidic as far as water quality. If it’s going into an aquarium, freshwater would be the ideal biotype. Since Claystone has such a low hardness level, some level of weathering can occur if fully submerged for long periods of time. I would recommend the use of this sedimentary rock in terrariums or paludariums. These types of vivariums allow the rock to be placed partially immersed or above ground where the chances of leeching are far lower.

When used correctly, Shale has great quantities that it can provide to an enclosure. It is an inert rock so it will have little to no impact on the vivarium. The smooth textured surface is optimal for inhabitants that need a flat surface to breed on like Angelfish. The lower levels of hardness from this stone make it easier to manage as far as breaking and sculpting the hardscape to an individual’s preference.

Shale, on the other hand, can have a few precautions to worry about if not carefully evaluated. The hardness level of this rock could potentially make it prone to crumbling within an aquarium. This is something to look for when acquiring Claystone for the first time. If there are any loose areas present around the edges, if not manually removed they will break off within the tank… Causing minerals to leech and making the aquarium appear dusty.

Another concern is the weight of the Shale. This amount of density per square centimeter will make it potentially dangerous for the glass as well as the inhabitants if not secured correctly. Never place the rock on the bare bottom of the tank or up against the side glass. The concentrated levels of pressure focused on the edge of the rock could cause the glass to crack.

With Claystone being so abundant, it can pretty much be found on the market anywhere. Most forms of Shale are sold in hardware as well as gardening stores. For the sake of assuring the stones, you seek to purchase are safe for vivarium use, I’d highly recommend going with a source that is selling Shale Rock specifically marketed for aquarium use. This will guarantee the product bought is authentic and 100% safe for tank mates. Click the image below to find out more about the current price and other relative info:

Here are a few more useful tips when working with Shale for the first time. Inspect the rocks to see what type of Shale has been acquired. Based on the color as well as sturdiness of the stone, you should be able to identify the possible minerals compacted into the formation of this rock. Before placing Claystone in an acidic vivarium, always do a quick alkaline test to assure there are no possibly toxic minerals contained within the rock. As usual, clean the Shale Rock to remove access dust or loose particles from the surface.

In most cases, a newly acquired Shale will need slight preparation before going into a vivarium. This will matter more for aquariums rather than terrariums since unclean stones can cause water to change color. Begin by placing stones in a bucket of cold water. Scrub and redip each stone thoroughly in the bucket of water. Rinse and repeat this process until you are able to place stones in a clean bucket of water and observe no noticeable change in color. Avoid using chemicals or strong water pressure on the sedimentary rocks so they aren’t worn down drastically and lose their aesthetics.

Shale is a fairly easy rock to break into smaller pieces if needed. In fact, a little too easy! In many cases, hobbyists will simply bash a towel-covered piece of rock with a large hammer. This is great for breaking the stone into lots of tiny pieces of rock… The downside to this is the potential pile of the undesirably crumbled pebble.

Another way that I much prefer is with a chisel kit. Chiseling off parts of the rock along the cleavage is a more controlled way to break Claystone into desirable pieces. No matter which way the rock is broken up, make sure to wear safety goggles because parts of the rock will go air born. Also, reclean rocks as needed once they are broken.

When designing a new enclosure for the first time, it would be best to stick with one type of stone to use as a hardscape. Furthermore, this type of rock can be hard to come by depending on where you are located in the world. If for any reason, you find Shale difficult to acquire, or simply want to consider something different… There are a wide variety of stones to consider. Here are some other types of stones one might find are worth taking a look at in place of Claystone: Shale is an aquascaping rock that few take the time to experiment with. With the sturdier alternative, Slate, I guess many opt for just usually that because it’s understandably safer. With Shale Rocks being so abundant, I suggest giving it a try in your next project and seeing what possible combinations can be built by combining this rock with the metamorphic version. We will be covering projects soon utilizing Claystone and hopefully show the untapped potential this clastic earth foreground can provide!