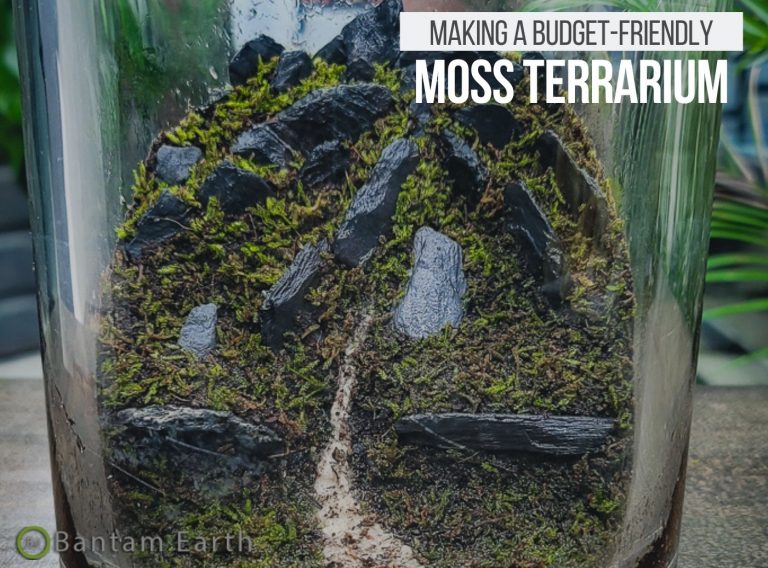 Here it is, a moss terrarium jar made from yard material. This is the third and final tutorial from the mossarium challenge one of you guys gave me earlier this month.

Moss terrariums are enclosures that exclusively use moss as the tanks decorative plant. Careful consideration of non-aquatic mosses is chosen to stock the landscape. These landscapes are often modeled after a real-life habitat. These terrariums are designed with the mosses care-needs in mind often leading to a bright, humid environment.

I decided to reveal this mossarium last for a specific reason. It needs time to acclimate. The overall design I have in mind for this enclosure will require time for the moss to grow in. Even though things look good for the time being, the true beauty will only come later down the line once the flora has had time to fill in.

Using nature as a source of inspiration, my goal was to capture a forested mountainscape. Using slate rocks I had laying around the front yard, I tried recreating the mountain peaks. I literally stockpile sheet moss for no particular reason at all. This moss would make the formation of trees surrounding the cliffside. There are a number of mosses that would probably work just fine for a project like this, so feel free to experiment with whatever you have available to you.

The first thing I like to do is clean and inspect the vase. Giving it a thorough whip with bleach and then vinegar is good practice. The bleach will remove any bacteria or production chemicals that might affect the ecosystem later. The vinegar removes the bleach and any stains that might be on the glass if the vase was used previously. Furthermore, I inspect the glass for any imperfections like scratches or chips. If you don’t feel like removing them make sure to mark that area use it as the backside of the enclosure.

Now that the vase is clean I applied the substrate in my usual slope formation. This will give a jar this small the appearance of depth. A good pro-tip to follow is saturating the coconut coir before shaping it. You want the mud-like composition to help keeps things firm before adding any hardscape material.

My choice of rock was slate chips for this project. I love the texture and vibrant shade of gray these rocks have. I had a ton of it in my front yard currently being used for the landscape and figured taking a few pieces wouldn’t destroy the property.

Starting from the top of the terrarium, I pressed small pieces of slate into the substrate. It took a few goes to get a formation I liked. I was careful not to bury the slate chips too far into the substrate. We have to remember, we still have a layer of moss to add that will eventually grow rather thick.

My end result so far displays larger pieces of rock towards the bottom. As the rocks get smaller going up the slope, I tried to create the illusion things are further away.

I was tempted to use a few types of moss before deciding to make this a sheet moss only build. The consistency of just using one type of moss per project is usually my preference. I literally shredded bits of moss and sprinkled it around the tank until I felt I had enough covering all the soil. Once the moss is applied, give it a light patting to help it lockdown.

My theory with cutting the moss down the way I did is that once it starts to grow, the new vertical growth will appear more like pine trees. Sheet moss grows towards the light so it should have a pretty predictable growth pattern under suitable conditions.

For now, I’m content with leaving things the way they are for now. Adding a little sand path are the finals touches to this moss terrarium. The way I achieved this was by parting the moss with my rake tool. After applying sand a few pinches at a time, I went back with the tweezer tool and neatly arranged the sand into this fading path.

Animals like micro-fauna do wonder in a moss terrarium. Isopods and springtails will help keep the environment clean while providing a nice bioactive element to this tank. You could also opt to add millipedes to setup this size. one or two should thrive in this environment. Anything larger would not be recommended.

When it comes to caring for a moss terrarium like this, little to no maintenance is really required. Just keep the enclosure humid at all times and provide plenty of direct artificial light. I have LED lighting already set up under the shelf these tanks sit under. They provide about 1000 lumens of daylight colored temperatures about 7 hours a day.

Another pro tip for maintaining humidity for an open-top moss terrarium such as this one would be to cover the vase with saran wrap at all times. I leave mine covered with about half an inch of opening in the front to allow fresh airflow. This is usually common practice for me when setting up new enclosures and really aids in helping the fresh-cut moss reestablish itself.

I will do an update on this moss terrarium in a few weeks to show you guys how it has grown in. Hopefully, it better showcases the look I was aiming for with this setup when I first set out to build it. What do you guys think of this mini mossarium series I attempted to do in an effort to display common ways mossariums are made? 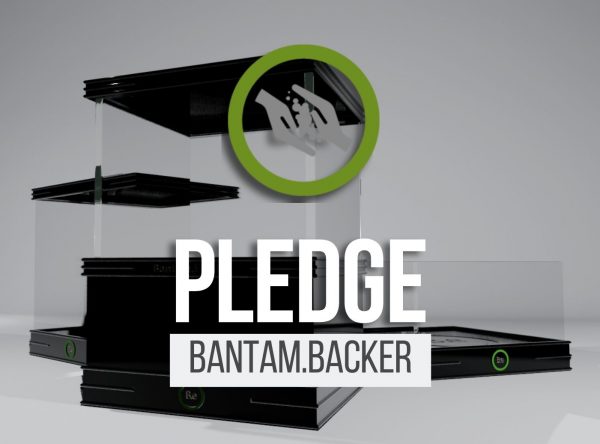