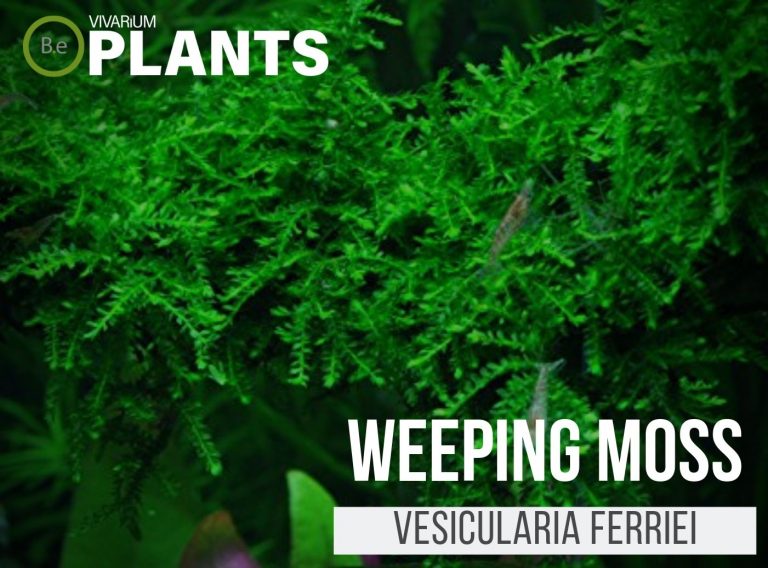 Weeping Moss (Vesicularia ferriei) is a plant that has begun to really grow in popularity in recent years. Being a great alternative to Java moss, This plant’s unique branching style offers vivarium enthusiasts an interesting take on freshwater aquariums.

The caretaking and propagation of this moss are much like many other common aquatic mosses and the distinctive hanging look this species of Vesicularia offers is sure to turn heads.

What Is Weeping Moss?

Vesicularia ferriei is a species of moss that grows in an outward fashion. This moss is mainly aquatic but will survive for a period of time on land if the humidity is high enough. Commonly referred to as weeping moss, this bryophyte is great for decoration around hardscapes giving off a mini tree look.

Weeping moss is the perfect substitute for common mosses and easily adds a level of diversity to an enclosure that will easily set a tank apart for those interested in trying something new.

Being fairly new to the hobby, Vesicularia ferriei has yet to receive other nicknames besides weeping moss. Besides the unique falling look, the creeping branches give off, the biggest noticeable advantage this moss has over other similar mosses… It is its ability to tolerate higher levels of light.

Where most bryophytes wither away at anything stronger than low light, this plant will outlast and continue to thrive. That fact makes this moss a good choice for smaller setups where lighting has a bigger influence on the overall scape in a vivarium.

Weeping moss is a pleurocarpous plant that generally grows up to an inch thick and has a vibrant green color. As the fronds grow outward from the plant, they will begin to sag in appearance. This moss has a traditional bryophyte rooting system that it uses to easily latch onto surfaces like wood or stone.

Weeping moss is thought to be native to China but can be found throughout most of Asia and Europe due to its newfound popularity in recent years. This moss is commonly found in a freshwater type of environment on the shallow bed floors of riverbanks and lakes.

The average temperatures in this native habitat will range from the low 60s to the high 70s.

Weeping moss tends to prefer to be on the more acidic side of potential hydrogen. In the wild, this plant is often found on very acidic wood logs or rocks with highly acidic surfaces. Ideal PH levels will be in a range of 5.0 to 6.0 but weeping moss can survive more neutral levels.

This type of moss will do great in a variety of vivarium types. When deciding if rather or not to use weeping moss in a particular type of enclosure, Be sure to go with setups that have fully aquatic areas. Here are recommended vivariums that this plant will do well in:

This moss is an aquatic-based plant. It will not do well partially immersed or fully placed above water for extended amounts of time. However, it does thrive in locations water is flowing and completely engulfing the plant.

Place this plant in the foreground of the vivarium floor tied to rocks or wood pieces. It will help provide coverage for small inhabitants like fry or shrimp.

Weeping moss can grow on a number of surfaces due to its unique way of absorbing nutrients and shallow root structure. In the wild, this plant is typically found anchored to fallen branches or caught between rocks.

The aquarium substrate or surface used should be firm and easily allow moss to latch onto. Wood, gravel, and sand are also sufficient textures that weeping moss can take sanctuary.

The freshwater environment Vesicularia ferriei is native to provides a realm of shade and some partial sun through shallow depths of open water. Exposing this plant to too much light will dry or burn this moss out.

When setting up lighting within the vivarium for this moss, a high level of brightness would be ideal since the plant is indoors. The tank should not be in direct sunlight and preferably away from any type of artificial light that produces UV. Aim for cooler color lights that mimic a cloudy day.

When shopping for possible weeping moss, expect a few key indicators you are buying the best quality plant. The moss should be snail free along with any other type of pest. The source of moss will usually be sold in small tissue cultures, ready for you to propagate.

Vesicularia ferriei, in general, are pleurocarpous plants, meaning it grows outwards. When propagated correctly, it will sprout small stems with spores on the tips that blow off and allow new colonies to begin growing.

This plant is a fairly forgiving plant when it comes to caretaking. Keep water conditions ideal and moss should thrive on its own fairly well.

The easiest way to propagate weeping moss will be to cut away sections of moss and replant them into other ideal areas of the tank for establishment. Secure new clippings with cotton thread or super glue to help moss latch onto new areas.

Once weeping moss is established in the given location, it will begin stretching out its creeping branches again. Use low ph water and moderate lighting to encourage growth and once acclimated, trim new culture masses to the desired look.

If weeping moss is kept fully submerged in low ph freshwater, it should do just fine without CO2 or added supplementation. Avoid leaving moss in stagnant water and keep some level of current passing through the plant.

This will not only help the propagation phase but also provide fresh nutrients to circulate through the plant at all times. If the plant is being placed above land, a high amount of humidity in the form of a fogger or mister will be highly recommended.

Furthermore, if for some reason you find this moss hard to acquire or would like to consider something similar to this plant… Here are some other plants you might find may do well with or in the place of Vesicularia ferriei: With good reason, you can easily see why this aquarium moss is gaining momentum as a vivarium plant in the aquascaping hobby today. It is extremely easy to care for… Adds a realistic dynamic to enclosures of all shapes and sizes… And can provide a healthy home for inhabitants to rest and feed on.

I predict that in the coming years, This weeping moss will become a household name and find a fitting place in many aquariums as well as other types of freshwater enclosures. Being such a rare moss to see in setups, do you find this bryophyte interesting enough to put in your tank? If so, what other types of plants do you think would nicely complement weeping moss?

Is Weeping Moss easy to grow?

Yes, Weeping Moss is very easy to grow. With a warm and humid environment, diffusion of light, nutrient–rich substrates, and regular pruning, it can thrive in aquariums and terrariums. For best results, it should be propagated on small stones or driftwood.

What is Weeping Moss?

Weeping Moss, also known as Vesicularia ferriei, is a type of green aquatic carpet moss that grows in the form of tendrils or strings. It is one of the most popular aquarium plants because of its ease in maintenance, its fast growth rate, and its ability to remove nitrates from the water. As a freshwater plant, it prefers warm, acidic water and softer substrates like sand, gravel, or clay. Weeping Moss also makes a nice addition to terrarium setups as well.

Can Weeping Moss be grown out of water?

Yes, Weeping Moss (Vesicularia ferriei) can grow out of water under the right conditions. The moss will thrive in humid environments if provided with adequate soil moisture. Make sure to place your Weeping Moss in an area with ideal temperatures and adequate light for optimal growth.

How do you plant Weeping Moss in an aquarium?

To plant Weeping Moss  in an aquarium, start by rinsing it thoroughly in cold, clean water. If placing it on substrate, make sure it is clean and not over–compacted. Otherwise gently secure each piece to a rock or driftwood with aquarium–safe glue or fishing line. You may also opt to use a layer of mesh or thin felt to hold the moss in place. Finally, provide the moss with sufficient light and humidity as these are essential for its growth. You can place Weeping Moss at various areas of the tank to create a more natural look.

Yes, Weeping Moss can float on the surface of water, as it is an aquatic plant species and contains specialized cells that allow it to absorb oxygen from the water.