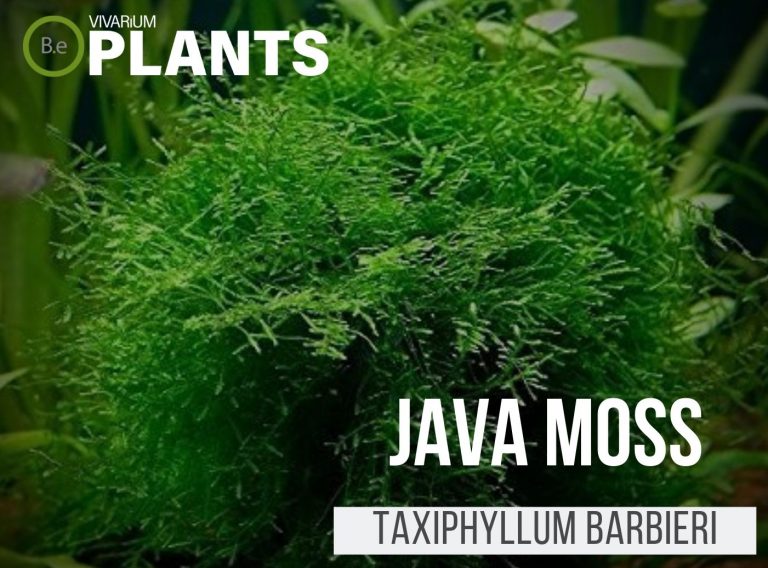 Java Moss (Taxiphyllum Barbieri) is a beginner-friendly vivarium plant to have in a low light enclosure with a variety of small animals. It can be especially beneficial for hobbyists trying to raise fry or tadpoles. This moss will provide shelter and help protect smaller creatures from cannibalistic adults. Java can also serve as a source of food. This plant will grow successfully in pretty much all substrates and attach itself to most surfaces. It is extremely safe for pets and considered to be one of the easiest mosses to care for. Java moss is a favorite of many beginners, due to its extreme hardiness.

What is Java Moss?

Java moss belongs to the Hypnaceae family and usually grows in moist tropical climates. Unlike other mosses, it can grow both fully submerged or in partial water. However, due to its little requirements when it comes to light and water quality, it is usually most common among freshwater aquarists. This moss is considered to be an invasive species because once it has settled in it is extremely difficult to remove completely. This makes it especially perfect for covering up rocks, walls, and driftwood in an aquarium. Hobbyists will also use it to create a carpet look along the bottom of the tank.

Besides Java moss, Taxiphyllum Barbieri is also known by a few other common names. Those include mini moss, dubious bladder moss, Singapore moss, and triangular moss. Despite it now being classified as Taxiphyllum Barbieri, there is still some controversy over its scientific name. Until not too long ago, it was identified as Vesicularia Dubyana. Some in the field even refer to the two plants as one and the same.

The plants’ fine strands make the perfect nursery chamber for tiny fry, tadpoles, and dwarf shrimp. Not only will does it provide shelter for the tiny creatures, but also food in the form of biofilm. More than that, Java moss is also highly beneficial to a tanks’ overall health. Due to its fast-growing ability, it is able to absorb high amounts of nitrate and phosphate. These two compounds are harmful to fish in large amounts and keeping them in check with the usage of this type of moss can be very important for the stability of any aquarium.

Java moss has small and very stringy branched stems that are filled with rows of clustered oval-shaped leaves about 2mm long. Despite its hardiness, it is considered to be a delicate moss. Java moss can vary in appearance based on where it is grown. For instance, its long bright green leaves will be significantly smaller when grown completely underwater compared to on land. Just like other mosses, Java moss does not have actual roots. Instead, it has tiny hair-like “hands” that help it attach itself to other surfaces or objects. It then uses its leaves to be able to absorb all the nutrients it needs to survive.

Java moss is native to Southeast Asia. It can be found all throughout Japan, Malaysia, Java, Indonesia, Singapore, Vietnam, the Philippines, and even the islands of the East Indian Archipelago. This moss is commonly found in moist tropical climates growing on river banks, rocks, tree trunks, or simply free-floating. Java moss will usually be seen growing along the edges of streams and ponds, as well as both in and out of water.

The average temperatures in this native habitat will range from low to mid 70 degrees Fahrenheit. However, it should still be able to tolerate temperatures anywhere between 59°F and 86 °F without any issues. The only thing to keep in mind is that the warmer the temperature, the slower it will grow.

Java moss tends to do well in most types of water. Although it can survive in brackish water, it will grow faster and healthier in freshwater. Java moss likes the PH level of the water to be between 5.0 and 8.0. Still, it will thrive better in slightly more acidic water rather than basic.

This moss is both a semi-terrestrial and an aquatic-based plant. It will do well partially submerged on land or fully placed underwater. It is most commonly used as an aquatic plant in freshwater aquariums. Java moss can be placed almost anywhere on a tank and still thrive. It can be used as a foreground cover for rocky or sandy substrates as well as carpets along the side of the aquarium to cover unattractive equipment. Use this moss as a floating plant to provide a reproduction site for mop-spawning fish. It will also help provide coverage for small creatures like the clean-up crew.

This type of moss will do great in a variety of vivarium types. When deciding if rather or not to use Java moss in a particular type of enclosure, be sure to go with setups that have can provide a moist/tropical setup. Here are recommended vivarium java moss will do well in:

Java moss can grow on pretty much any surface due to its unique way of absorbing nutrients and shallow root-like structure. In the wild, this plant is typically found on damp soils, stones, tree trunks, or fully underwater. This moss is also able to thrive basically without any substrate at all. As mentioned before, it can be left in floating clumps throughout the tank and continue to grow successfully.

Although all plants in general need light to photosynthesize and be able to grow, Java moss does not need a lot of it. This makes it a great plant for low tech aquariums that don’t have a strong lighting system. Java moss is one of those plants that will survive and thrive in almost all conditions. However, the amount/ type of light it receives can affect the way that it looks. High lighting will make Java moss look dense and compact, while low light gives it a darker and slender look. Even then, the difference is not extensive with this moss.

When shopping for possible Java moss for sale, expect a few key indicators you are buying the best quality plant. The moss should be snail free along with any other type of pest. The source of moss will usually be sold in small tissue cultures, ready for you to propagate. The batch should arrive fairly moist and in fairly good shape. Click the image below to find out more about the current price and other relative info on Java moss for sale:

The best type of care for Java moss is maintaining good water quality. Liquid fertilizer can be used every once in a while to promote new growth and keep moss healthy. Due to its hair-like texture, Java moss kept at the bottom of a tank can collect a lot of waste. If not cleaned properly, this can look unattractive as well as damage the moss itself. To clean it, remove moss from the tank and simply rinse it thoroughly with water.

One of the only common issues experienced with Java moss is algae growth. Once the algae have begun growing in the moss, it is basically impossible to get rid of it. If that is the case, the entire plant will most likely have to be thrown away. In order to keep algae from growing in the Java moss, it is important to keep the water clean and avoid too much light.

The easiest way to propagate Java moss will be to divide an existing piece into individual clusters. Simply attach the new pieces somewhere else and allow reformation to colonize. New java moss should begin growing in a matter of days. Unlike other mosses, this is slow to a medium growing plant. In order to allow it to grow faster and better, do not move the moss around. Place it in one spot, leave it alone, and trim it periodically. It will grow both horizontally and vertically eventually forming a dense turf.

Java moss is most commonly used as an aquatic plant and will remain fully submerged at all times. Therefore, it will most likely not require any additional watering. An important factor to keep in mind for a healthy plant is the proper water flow. A good steady current is needed to allow fresh water to reach all parts of the moss. If Java moss is left sitting in stagnant water, the inner parts might ultimately begin to turn brown and die. As long as the moss is not too dense, the flow from a filter should be more than enough.

Adding diversity to an enclosure is key to an aesthetically pleasing enclosure. Try mixing up the look of your vivarium with different flora that can easily co-exist in the same types of environment. Furthermore, if for some reason you find this moss hard to acquire or would like to consider something similar to this plant… Here are some other plants you might find may do well with or in the place of Taxiphyllum Barbieri: 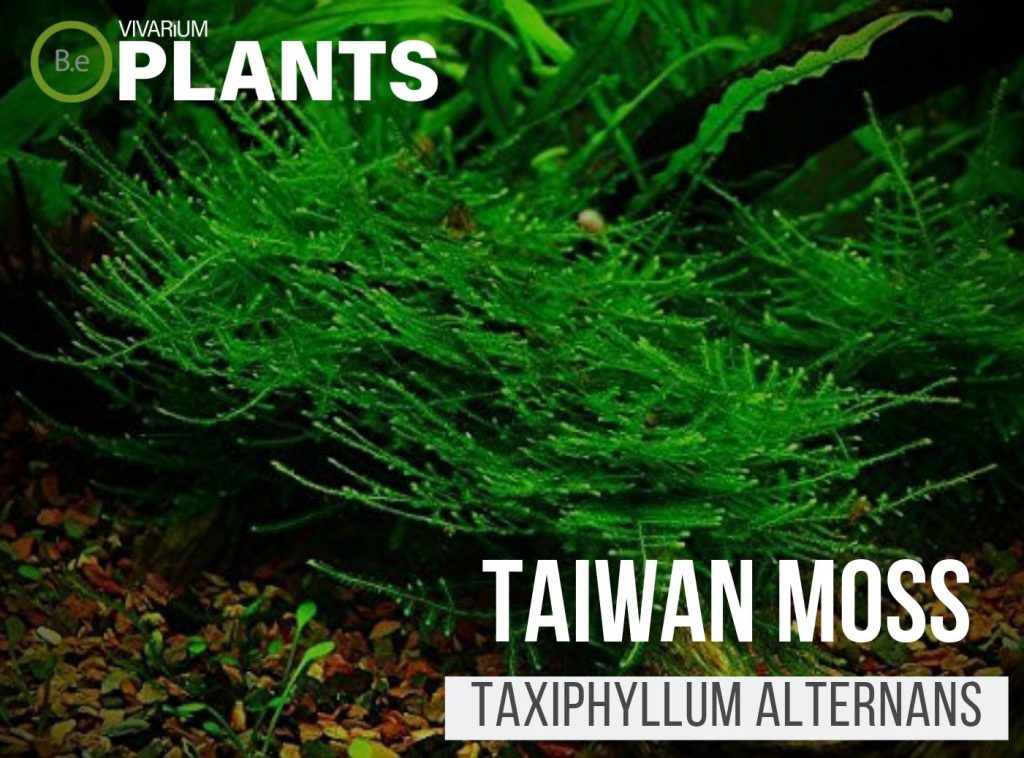 My overall opinion about Java moss is that it is a great moss to use for aqua-scaping in most tanks. Avoid putting this type of moss in dry enclosures or terrariums that don’t have an extremely high level of humidity. However, I would recommend it for fully or partially aquatic builds that want to go for a very tropical look. Taxiphyllum Barbieri’s few care requirements and versatility make it the perfect plant for beginners to use. It can help dress up and accentuate any space, while also helping all of the animals living in the enclosure.