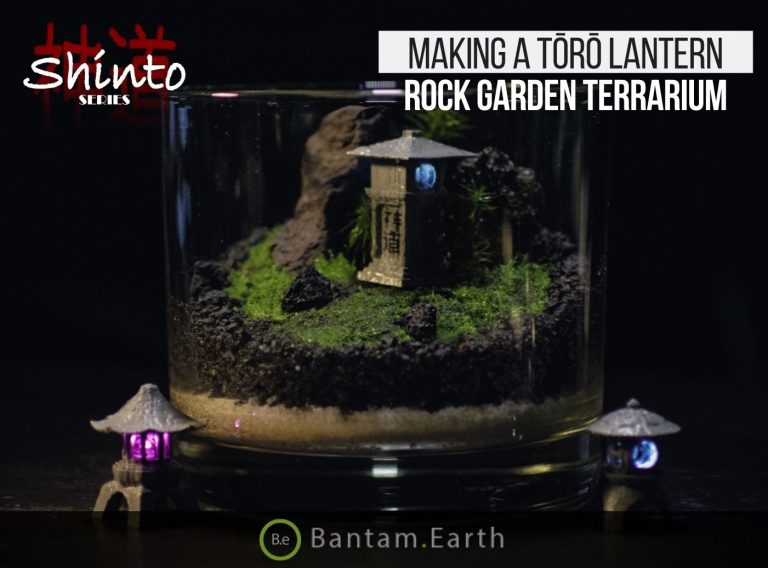 Hello and welcome to part two of the Shinto Series! In our last tutorial, we covered the introduction into my inspiration behind this Japanese-influenced bantamarium experience with a shinzo terrarium. This guide will aim to continue that conversation as we design a Tōrō Lantern Terrarium with functioning lights.

A Working Pagoda Lamp In a terrarium

Tōrō lanterns can be found throughout Japan. Originally coming from China, these lamps are often found in the rock gardens of shinto shrines. I felt very compelled to do my take on a very traditional rock garden scene and found a really clever way to add a functioning light to my Tōrō lanterns. If you haven’t already, check out the full length video I did about the Shinto Series!

When it came to making a Japanese garden terrarium, there were a ton of options to choose from. I originally had my mind set to do a rock garden with a few Tōrō lamps. The end result would have been something that consisted of mostly sand. I opted to do something with more foilage and slightly larger lamps big enough to actually light up. Let me show you how I did it:

While coming up with some ideas for traditional tōrō lanterns, I had a really hard time settling on one design I felt embodied the vision I was going for. So I after careful consideration I narrowed a dozen designs down to three. It wasn’t easy and honestly it still isn’t easy to decide on which of these three get to remain in this terrarium permanently.

As far as assembly and painting, this is probably the easiest models of all the ones I’ve made so far to prepare. There is no assembly needed to use the models as is and the painting aspect is literally two coats of a single color. I used light grey to replicate a traditional stone look.

Before applying a clear sealant, I decided to paint the word “shinto” in Japanese on the side of the taller Tōrō Lantern. I thought it added a personal touch and it wasn’t too difficult to pencil on with a toothpick. 😅

I made these models hollow with the intent of setting up a small battery powered light to really take things to another level. This was very meaningful to me.

You see, tōrō lamps are constructed to represent the five elements of Buddhism cosmology with the light representing fire (which is commonly referred to as ka). Any part of the tōrō could be excluded with the exception of the flame… So as you’ve probably now put together, I really needed the flame!

The light was pretty easy to accomplish using a LED light, two watch batteries, and a little piece of electric tape. With a linear style of construction, this assembly will neatly fit right into the column (or sui which represents water) above the base (or chi which represents earth).

With all things in place I decided not to glue the top, which represent the last two elements fū (air) and kū (spirit), to the rest of the Tōrō Lantern. There’s no particular reason, you could glue yours if you want to. I think it just makes changing the lights later a little easier.

For this terrarium, I decided to go with a smaller glass vase this time (same size as the Shinzo terrarium) just to experiment on how the proportions look. It worked really cool and was very noticeable next to my larger setups. Vase size and shape are always up to you so I always push for creativity when it comes to these living dioramas.

Like our shinzo jungle terrarium, I started with a thin base layer of sand to help separate the enclosure from the bottom of the glass. About half an inch evenly will do just fine.

Now I’m going to pour black aquarium gravel in a sloped formation just like the last terrarium except I don’t want it as steep. With this setup being a rock garden, it will need to be a bit more shallow. I’m placing the front gravel about an inch deep and the back about an inch and a half.

Next, we can place rocks strategically to form an iwagumi style. It’s common to see rocks stacked in Japanese gardens in odd numbers so keep that in mind. A quick test fit of our tōrō lamp and we are ready for some plants.

I’m keeping my selection low with two choices of moss for this setup. Barbula Sp. Will make up the ground foilage and be the dominant flora in this setup. Over time, it will eventually spread to cover everything in this terrarium. So for now, I’m creating a circular pattern carefully coverage outermost edges with additional gravel.

Polytrichum Commune (aka haircap moss) is a very common moss used in many Japanese terrariums so I think it makes a good fit to add a few around theLantern.

With a light misting aiming from the top down to avoid directly spraying the lights, this enclosure is good to go!

A number of micro critters could do well in this type of terrarium. I’m a huge fan of animals that help maintain the terrarium. Springtails, isopods, or even a small colony of ants would fit this enclosure nicely. For this terrarium, I will be looking to add something unique. Stay tuned for updates on this if you follow me on any of my social media.

As with most of my miniature terrariums, this tank should do well on its own. As things grow in, the natural take over will only further enhance the scenery. If you haven’t already, mist down the scape and seal it with a little plastic wrap. Open it every once in a while allow fresh air to circulate.

So with this tōrō lantern rock garden terrarium complete, we can move on to chapter three of the Shinto Series. I’m really happy with the outcome of this enclosure and the lighting elements is a unique touch that looks even at night when it cast a slight glimmer of light along the garden. This is truly a unique piece of art that very simple to make. Let’s get prepared to raise the bar a bit more in the next one and I will see you all there! 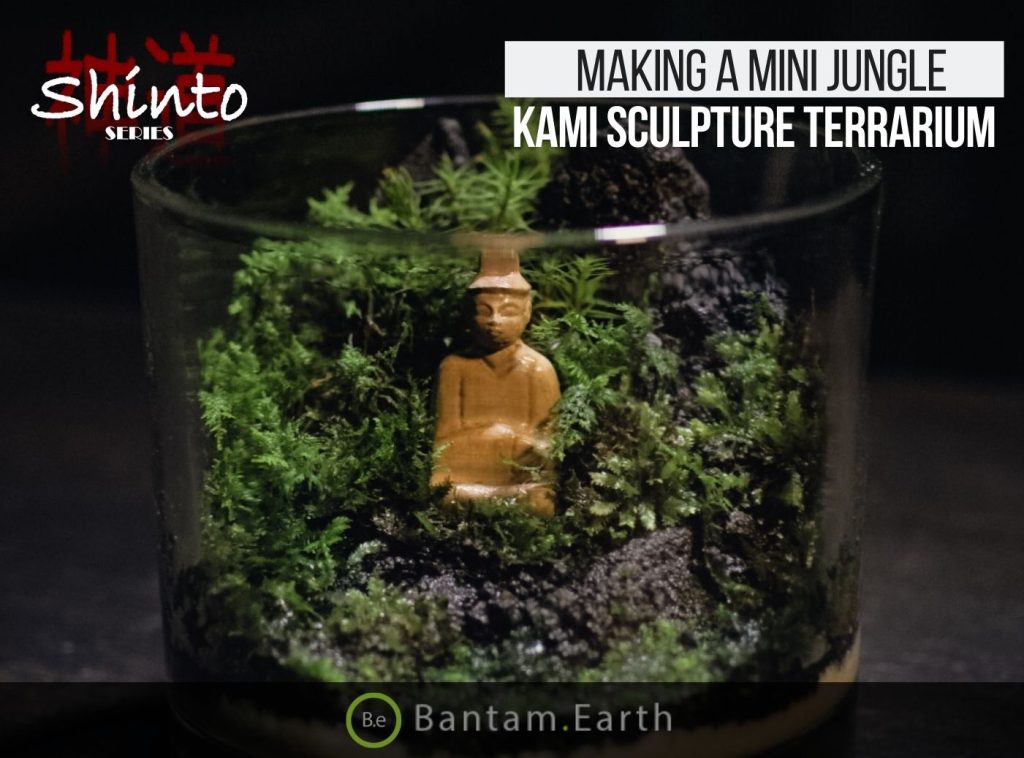 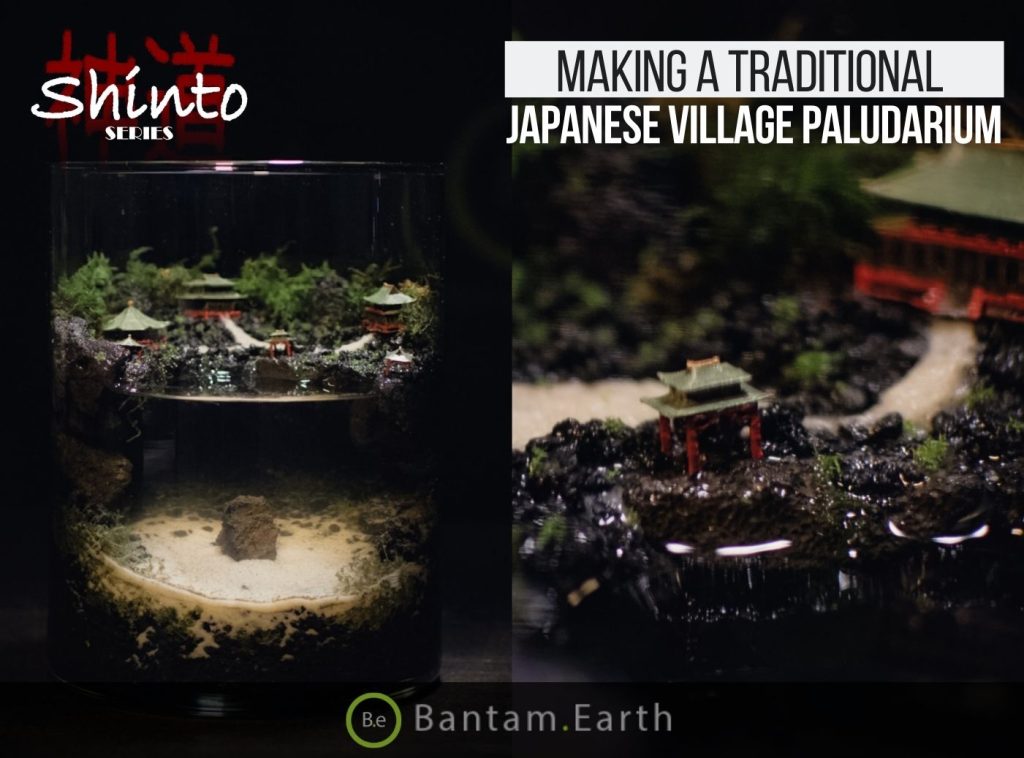