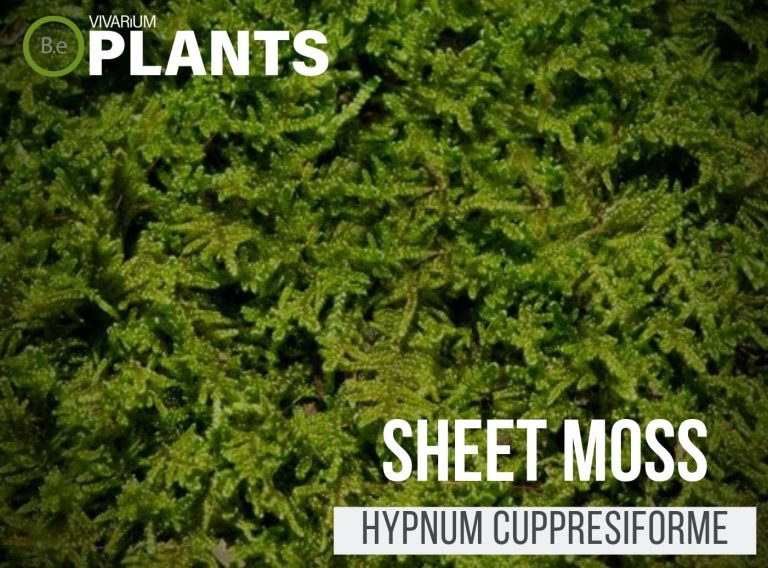 Sheet moss (Hypnum cupresiforme) is by far one of the most popular carpeting mosses to use in the vivarium hobby. The methods of growing this terrarium plant as well as its availability have made it a household plant to use in a number of projects even outside of just vivarium decoration.

Even though many are probably more familiar with the preserved version of this plant, this article will provide an in-depth understanding of the living version of sheet moss.

What Is Sheet Moss?

In modern times, the term “sheet moss” is loosely used to identify any form of pleurocarpous land moss. In a more appropriate usage, the term is usually used to refer to bryophytes of the specific genus, hypnum.

To correctly identify sheet moss for easy acquirement and understanding, Hypnum cupresiforme would be the exact species of moss being identified when we refer to sheet moss in today’s post.

Hypnum is a very desired species of moss because of its hardiness and infamous carpeting capabilities. This evergreen lawn-like plant has limitless potential as a vivarium plant and for good reason, that will be further discussed.

Other than Sheet moss, Hypnum cupresiforme is also known to be called Hypnum moss, and Cypress-leaved plaitmoss. At one time, this moss was used as a pillowcase and mattress fillings, that’s where the word Hypnum originated from. Hypnum is a play from the Greek word Hypno, meaning sleep.

The word sheet, on the other hand, obviously came from the fact that this moss grows into a very densely layered mat. Other more closely related uses for Cupresiforme, is in its preserved state for decoration in crafts and fairy gardens that mimic a living environment.

The Hypnum spp. in general has very wheatgrass look to them. The branches stem out to feathered leaves that almost look hand woven. Depending on the exact species of hypnum, those individual feathered stems will vary in appearance. For instance, Hypnum Curvifolium has curved branches, giving it a more curly hair-like look from a distance.

Hypnum cupresiforme, on the other hand, has a more erect style branching, giving this version of hypnum a more cypress tree looks at first glance. With this genus of moss growing in an outward direction, it typically will not grow taller than about 4 inches. The colors of this moss will range from dark green to yellowish-green depending on the condition of its living environment.

Sheet moss can be found throughout the world, thriving in shaded areas where the soil is consistently damp. Besides the moist comfort of soil, this plant will often be found covering fallen branches on dead trees, stones/rocks, and will even grow vertically up living trees and concrete walls.

The hardiness of sheet moss makes it a hard plant to kill and will even tolerate certain levels of polluted air in more densely populated areas. This moss can tolerate a wide range of temperatures as well, from below-freezing to the high 90s for a period of time. Ideal temperatures should be kept between the low 60s to mid-’70s.

Sheet moss tends to prefer to be on the more acidic side of potential hydrogen. In the wild, this plant is often found on very acidic substrate surfaces. Ideal PH levels will be in a range of 5.0 to 6.5 but this moss will easily tolerate more neutral levels around 7.

This type of moss will do great in a variety of vivarium types. When deciding if rather or not to use sheet moss in a particular type of enclosure, Be sure to go with setups that have dry terrain areas. Here are recommended vivariums mood moss will do well in:

This moss is a terrestrial-based plant. It will not do well partially submerged or fully placed underwater. However, it does thrive in a moderately damp, well-drained substrate. Place this plant on the foreground of the vivarium floor over just about any type of surface and moss will spread once established.

Applying sheet moss vertically to backgrounds or branches will also be a good placement for this moss as it has no problem quickly attaching itself to any type of sturdy material.

Sheet moss can grow on a number of surfaces due to its unique way of absorbing nutrients and strong latching rooting system. In the wild, this plant is typically found on damp soils and stones.

The substrate or surface used just needs to have some type of drainage allowing excess water to run off or through the medium. wood, sand, and dead litter are also sufficient textures sheet moss can easily spread over.

The woodland environment Hypnum cupresiforme adapts best to provide a sanctuary of shade. Exposing this plant to direct sun will dry this moss out quickly. When setting up lighting within the vivarium for this moss, a high level of brightness would be ideal since the plant is indoors.

Avoid placing the enclosure near indirect sunlight and preferably away from any type of artificial light that produces UV. Aim for cooler color lights that mimic a cloudy day or shaded forest.

When shopping for live sheet moss, expect a few key indicators you are buying the best quality plant. The moss should be snail free along with any other type of pest. The source of moss will usually be sold in small tissue cultures, ready for you to propagate.

The batch should arrive fairly moist and in fairly good shape. Being a very durable plant, if moss is received in a poor state… Placing moss in an ideal location should allow spores to propagate and bring moss back to life. Click the image below to find out more about the current price and other relative info:

Hypnum sp. if given proper care, is a very easy moss to manage and grow. When propagated correctly, it will sprout small stems with spores on the tips that blow off and allow new mounds to begin growing.

If possible, try to avoid loose textured surfaces like sand or fluffy soil because it is more difficult for moss to latch on and establish itself properly.

There are two popular ways to grow sheet moss, it is either through the process of division or the process of grinding and spreading. Dividing an existing culture will grant faster results as far as immediate placement.

Blending the moss with water or buttermilk into a paste will take more time to establish but might warrant a more controlled look over the long run. Depending on personal preference and if rather or not pets currently inhabit the tank will be the deciding factor between which way a hobbyist will grow sheet moss in an enclosure. Use low ph water and moderate lighting to encourage growth and once acclimated, cut back on the amount of water given.

The best-case watering scenario for sheet moss would be to water it when it appears dry. Allow the moss itself to dry out completely while only keeping the soil it sits on moist. This is a plant that does not do well in constant moisture. If using a mister or fogger, sheet moss should spend the majority of the day dry with plenty of airflow.

Allowing sheet moss to dry out periodically will help prevent rotting and mold build-up. This type of moss is a moderate grower due to its pleurocarpous growth pattern. Even though it is a faster-growing bryophyte, it still needs time to breathe and absorb nutrients received through watering.

Furthermore, if for some reason you find this moss hard to acquire or would like to consider something similar to this plant… Here are some other plants you might find may do well with or in the place of Hypnum cupresiforme: 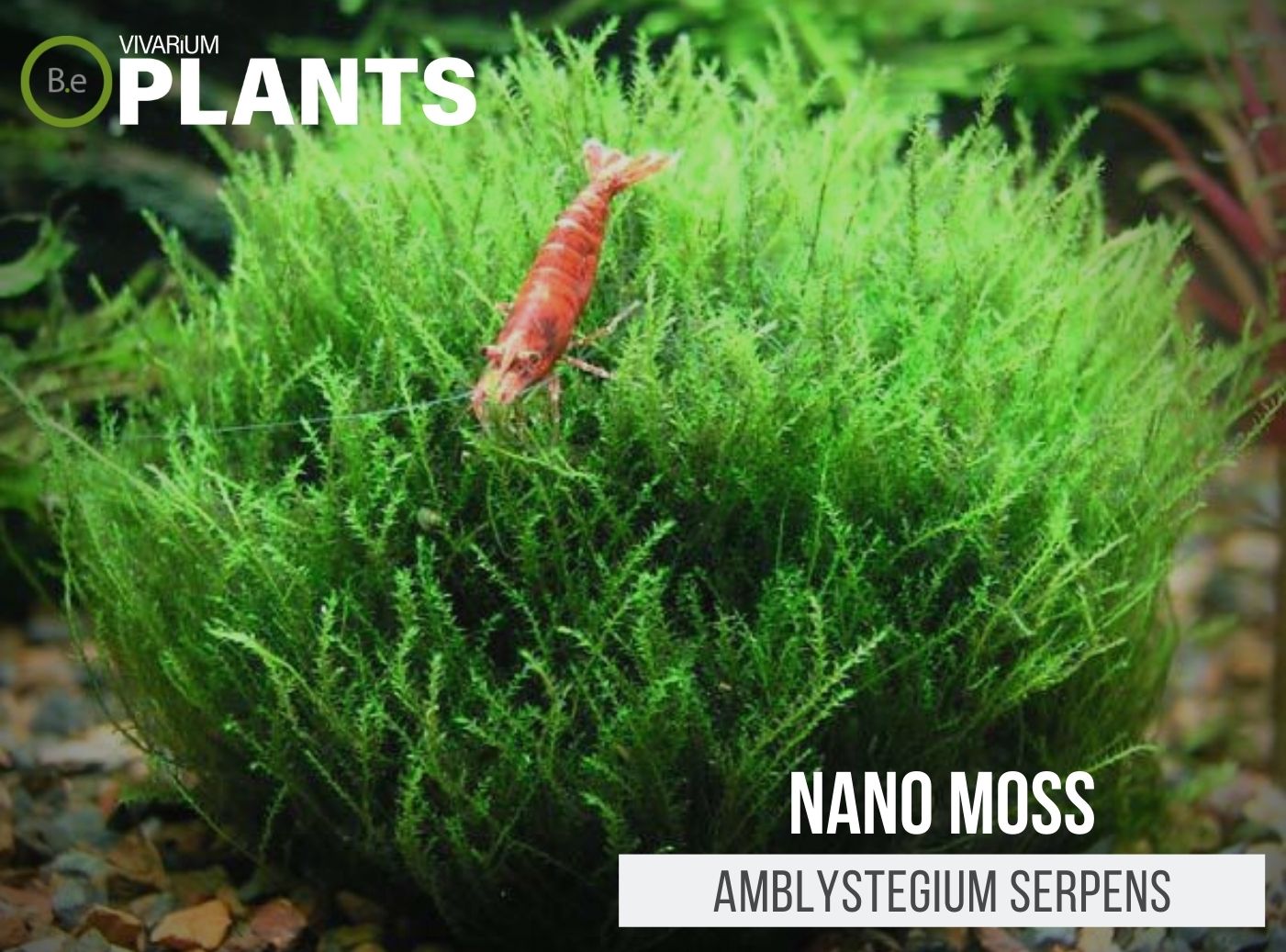 This article should illustrate a number of reasons why it is so popular within the hobby today. It is a very forgiving terrarium moss to have and it’s extremely easy to propagate and control. Adding Hypnum to any rain forest type setup will quickly give the terrarium a seasoned and aged look.

If you are a first-time vivarium enthusiast building a paludarium, riparium, or even a damp terrarium, I’d strongly recommend you start out with this moss before attempting to work with any of the other types of bryophytes. furthermore, when going to purchase this moss for the first time, be wary of preserved or dyed versions of this moss. Live sheet moss will be free of any chemicals and easily grow in thriving environments.

What is sheet moss?

Sheet moss (Hypnum Cupresiforme) is a type of moss with a flat, carpet–like form that often grows in large, dense patches. It is used in gardening, landscaping, and vivarium building to help give a natural, pleasing look to an outdoor space or enclosure. Sheet moss is easy to propagate and maintain, making it a popular option for gardeners and vivarium enthusiasts.

How do you keep sheet moss alive?

To keep sheet moss alive, water it frequently, keeping the soil moist but not saturated. It needs to be in partial shade and a cool environment. Mist the moss regularly to keep it moist and avoid direct sunlight.

How fast does sheet moss grow?

Sheet moss can quickly reach maturity and reach a maximum spread rate of up to 0.25 inch per day within six weeks.

What is sheet moss used for?

Sheet moss is a versatile plant often used in gardening, landscaping, and terrarium decorating as an ornamental ground cover. It is also useful for binding soil, preventing erosion due to its extensive root system, and for adding texture and color to an environment.

How long does sheet moss live?

Most species of sheet moss (Hypnum Cupresiforme) live for about 10 years, though some varieties can live for much longer.