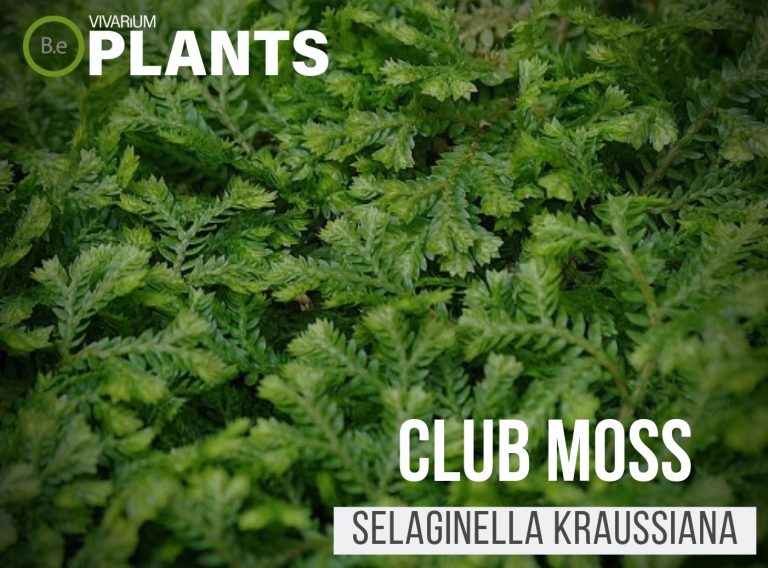 Club moss (Selaginella kraussiana) is a common moss that adapts extremely well as a terrarium plant. This fast-growing, ground-covering moss loves moist conditions and is relatively easy to care for. The hardiness of club moss is fairly high on the durable meter… Making it an ideal candidate for rugged inhabitants that like to play hard on their environment.

What Is Club Moss?

Club moss, scientifically known as Selaginella kraussiana, belongs to the Lycopodiaceae family of vascular plants. Selaginella is made up of over 300 different types of species but this article will cover the Kraussiana species.

Kraussiana is commonly referred to as club moss because of its unique branching style. This plant is great for carpeting flora in terrain-based enclosures because of its rapid growth outward… Easily covering the soil in a relatively short amount of time.

Club moss is also referred to as Spike moss, Golden moss, and African club moss by many in the hobby. Despite this plant being named a moss, it is in fact not a true moss. Selaginella, in general, is a close cousin to the fern family even though it doesn’t really get classified as a true fern either.

The similarities in caretaking, as well as the benefits of the vivarium, are why I’ve decided to list it alongside the moss and liverwort groups. This plant will easily do well in an enclosure that coexists with other moss due to its requirements.

Club moss is a dense mat-forming plant that grows outwards instead of upwards. It generally doesn’t grow taller than about 2 inches making it great for terrariums of all sizes. Selaginella will range in color from various shades of green with or without frost tips, depending on the exact species.

The leaves that sprout from its branches have an oval, prehistoric, fern-like appearance. Unlike true mosses, this flora has a traditional root structure and will often sprout roots from stems that venture far from its base.

Club moss is a primitive plant whose origin originates in mainland Africa. Being an invasive plant, it can often be found in parts of the United Kingdom, Ireland as well as New Zealand due to unnatural cultivation.

The natural habitat Club moss thrives in is a damp, shaded forest or woodland-type environment. Being a hardy plant, this Selaginella species can survive in temperatures as low as the 40s but prefers to be in the 70 degrees Fahrenheit range.

Like many mosses, Club moss does well in acidic or neutral soils. A safe PH range for this plant will be around 6.5 marks. Anything above 7.0 should be brought down immediately, furthermore, the more acidic the better.

Club moss will require high humidity type environments with a well-drained substrate. Avoid vivarium types that consist of mostly water to prevent roots from oversaturating in water. When deciding on a vivarium to place this plant in, be sure there is plenty of land area for the foliage to comfortably establish itself in.

Here are recommended vivariums club moss will do well in:

Club moss is a terrestrial-based plant. It will not do well partially submerged or fully placed underwater. However, it does thrive in a moderately damp, well-drained substrate. Place this plant in the foreground of the vivarium floor between rocks around the base of plants.

It will help retain moisture within the substrate and provide coverage for small insects like the cleanup crew. This type of plant will spread quickly across the soil, so it is ideal for anyone looking to cover open areas of ground real estate.

Being that club moss has a moderately deep rooting system, it will require a couple of inches of loose soil. The ideal substrate should consist of nutrient-rich soil like coco fiber and peat moss.

The ground area should also be kept damp the majority of the time with a drainage feature that allows excess water to pass through completely, preventing root rot.

When trying to mimic the natural environment of Selaginella kraussiana, the right amount of lighting will be key to completing the habitat. Since club moss thrives in shaded areas of the African forest, a cool blue stream of daylight will be what is replicated here.

Bright artificial lighting will be recommended for this type of scene. Avoid any type of sunlight, rather it is direct or indirect. We want full control over the amount of light that comes into contact with this plant. Providing an enclosure with artificial light will also help unwanted fluctuations in temperature.

If any type of light that produces UV rays are added to the tank, make sure it is blocked out by other types of foliage better equipped to handle that type of lighting.

When shopping for possible club moss for sale, expect a few key indicators you are buying the best quality plant. The plant should be snail free along with any other type of pest.

The source of Selaginella will usually be sold in small tissue cultures, ready for you to propagate. The batch should arrive fairly moist and in fairly good shape. Click the image below to find out more about the current price and other relative info:

Selaginella kraussiana, are root-dependent plants that grow outwards. Proper hydration and lighting will be essential to the development of this fern-like plant. Be generous with acidic to neutral PH water and propagation should quickly take its course with Selaginella.

When first moving this plant into a new location, don’t stress too much when you see signs of transplant shock. Browning is inevitable at the beginning of this plant establishment and it should quickly bounce back once settled in.

Regardless if you are starting with a new culture or would like to split up an existing mat of club moss, the steps are essentially the same. Split the plant at its stem and place it at least an inch into healthy soil.

Even if there are not any roots present, selaginella will begin regrowing new roots and should begin creeping branches outward from their original placement. Remember to keep the soil damp at all times to assure the plant’s regrowth.

Watering should be pretty predictable at this point. Keep the soil damp at all times of the day with low-PH water or even slightly neutral water. If the drainage is properly engaged, the soil should have no standing water allowing generous amounts of water to be added at a time.

A misting system can be added to alleviate the constant watering needs this plant will demand. Be careful not to overwater club moss either… You do not want a saturated substrate, just damp enough soil to keep the flora happy.

Furthermore, if for some reason you find club moss hard to acquire or would like to consider something similar to this plant… Here are some other plants you might find may do well with or in place of Selaginella kraussiana: 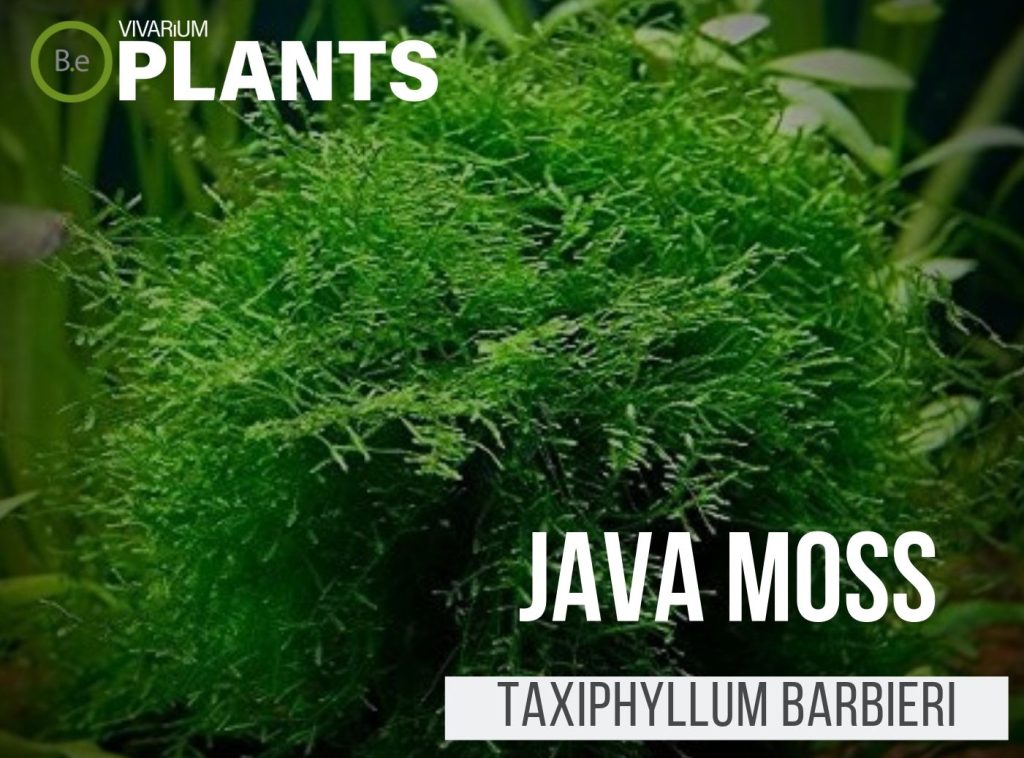 When it comes to the overall caretaking of club moss, I would place this plant at the easy-care level. It is a pretty hardy plant that doesn’t require a high volume of light. Selaginella is a perfect foreground plant for an enthusiast to add to any terrarium.

For the most part, it’s strong enough for inhabitants to coexist with and safe to have in a vivarium. I would recommend adding this creeping mat to forest or woodland-type enclosures that have high levels of humidity. Those looking to spruce up an existing tropical-themed tank might find this terrarium moss suitable as well!

How do you care for club moss?

Selaginella kraussiana, also known as Club Moss, is a low–maintenance, ground–covering plant. To care for it, place it in part to full shade, in moist, well–drained soil. Regularly water Club Moss to keep the soil evenly moist, but never soggy or dry. Prune it back if it becomes too unruly. Pests and diseases rarely affect Club Moss, but it can develop brown patches if full sun exposure is extreme.

How much light does club moss need?

Selaginella kraussiana, also known as club moss, prefers bright, indirect sunlight. If kept indoors, it is best to place the plant near a west or east–facing window, so it receives plenty of light but is not in direct sunlight. Outdoors, it does best in partial shade, although it can tolerate more sun when grown in cooler climates. If grown indoors or in a vivarium, bright artificial lighting is the way to go.

Is club moss easy to grow?

Yes, Selaginella kraussiana (club moss) is relatively easy to grow. It is tolerant of a wide range of temperatures, and prefers indirect and filtered light as well as medium humidity levels. When watered, allow for excess moisture to drain and provide plant food every two weeks to keep it looking healthy and growing strong.

Is club moss an indoor plant?

Yes, Selaginella kraussiana, commonly called club moss, is an indoor plant that can be used to add color and texture to your home or vivarium. The plant is known for its soft, delicate foliage and requires minimal care to remain healthy. It thrives in bright, indirect light and moderate temperatures and does not require frequent watering.

How often should I water club moss?

Club moss requires watering about once a week. Be sure to check soil moisture before each watering – if the soil is still damp, hold off until soil is more dry. Water thoroughly, but always make sure there is proper drainage.